My WIS buddies can still call me a Seiko fan boy despite my recent Swiss appetite J. I had a predominant focus in my watch collecting for Seiko divers (vintage and modern) and I was also attracted by other categories as well. Out of all the vintage Seiko’s I’ve had throughout the years the watch that I am reviewing today is the only vintage one that remained in my collection. The King Seiko Hi-Beat 45-7000.

I’ll start this article with a bit of history. We all know about the Suwa and Daini factories competition. What I think (or like to believe) it was in fact more of a friendly rivalry, a partnership between two brothers that got each other’s back (when the Swiss bullies ate their lunch sandwich J) and helped whenever it was needed, but in the same time competed  for the parent’s attention and validation.

Daini had the King while Suwa had the Grand. Grand is still present nowadays (following its resurrection in 1988 with a quartz and in 1998 respectively with a mechanical movement) while King Seiko production was never resumed following the halt on both Grand and King production in the 70’s following quartz crisis (funny how this crisis it was generated by themselves with that Astron launched on the Christmas Day in 1969).

While I was preparing to write: “let’s get the measurements out of the way”, I realized that I don’t want to get them out of the way as they are lovely. Vintage inspired, full of charm and delicacy. I think that for any men wrist size (unless you’re a bodybuilderJ) a 36mm watch should feel at home. Paying respect and evocative of the past.

On my lovely 7Friends&Watches lizard strap, equipped with the OEM (correct for this model, so rare to find and crazy expensiveJ) KS buckle, the King Seiko Hi-Beat 45-7000 weighs 47 grams…feather like. 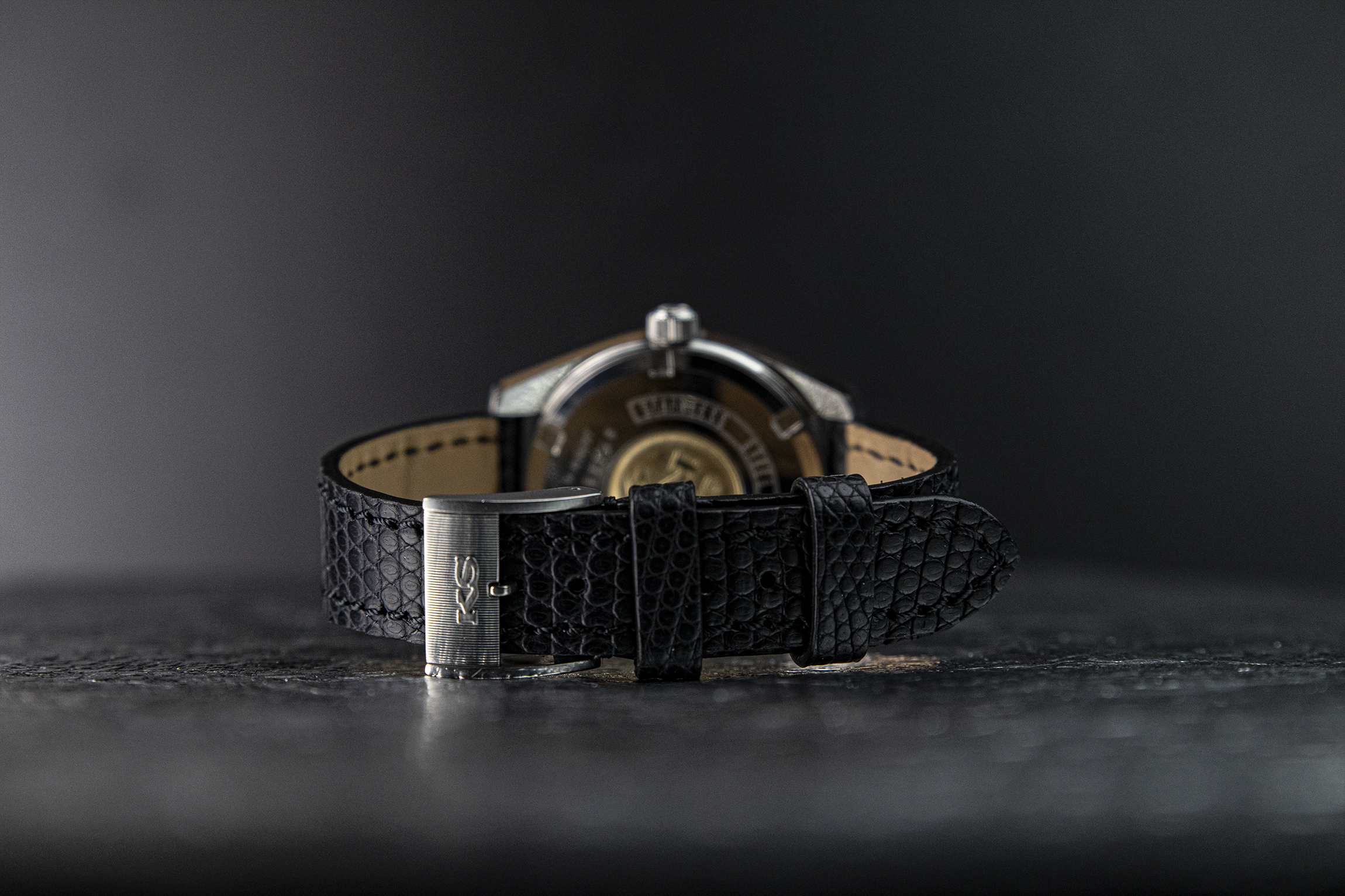 There is no date on this King Seiko Hi-Beat 45-7000. In fact it is my only watch in my collection that has this … “complication” J not having anything else but the three hands …. there is a romantic charm to it. We can less distracted admire the dial and the case and you don’t need to know what day it is when you look at such a beautiful watch. You get disconnected from the daily/weekly routine. You just know the hour and minute of that day regardless of the date or day of the week. Is like you’re living that particular moment not minding which day of the week it is and what meetings one might have scheduled. And you can focus better on the seconds hand movement which is mesmerizing. It ticks 10 times per second… when I received the watch years ago, the first thing I’ve done was to admire the seconds hand movement and listen to the movement. What a beautiful thing! It looks like a spring drive from a distance J 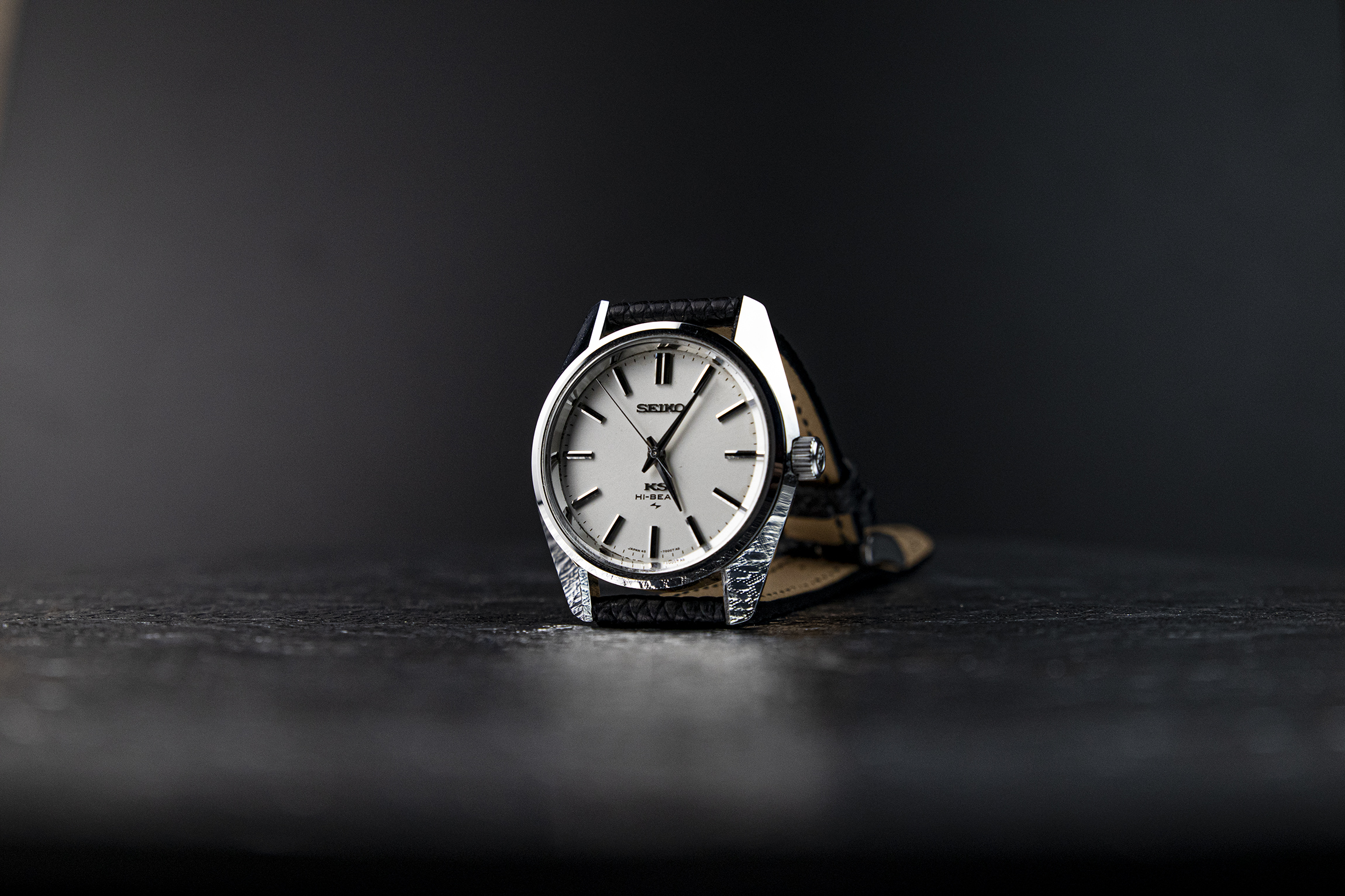 The sound of a 36k bph is something unique. Whenever I get the chance and I am in a quiet environment I listen to the sound of this watch ticking… is like hearing a stream of rice beans poured from one pot to another… hypnotic.

The dial has a lovely champagne sunburst and the markers are polished with back stripes on the middle (with no lume as a dress watch should be). The inner chapter ring has a mirror like aspect which creates a lovely reflection of the dial and markers in various lights settings. The hands are elegant with the same black stripes on the middle matching the markers. This attention to details is amazing. Logo is applied which was an often seen one for the Seikos from that period.

At 6 o’clock sits the proudly applied KS logo, the high-beat movement characteristic (which was and still is a quite rare thing even for Swiss pieces – unless is a Zenith J) and the Daini symbol (which took me a while – at the beginning of my watch collecting journey – to differentiate from the Suwa one J)

The crown has a nice grip (which is great since is a manual wind) and a lovely engraved KS logo. 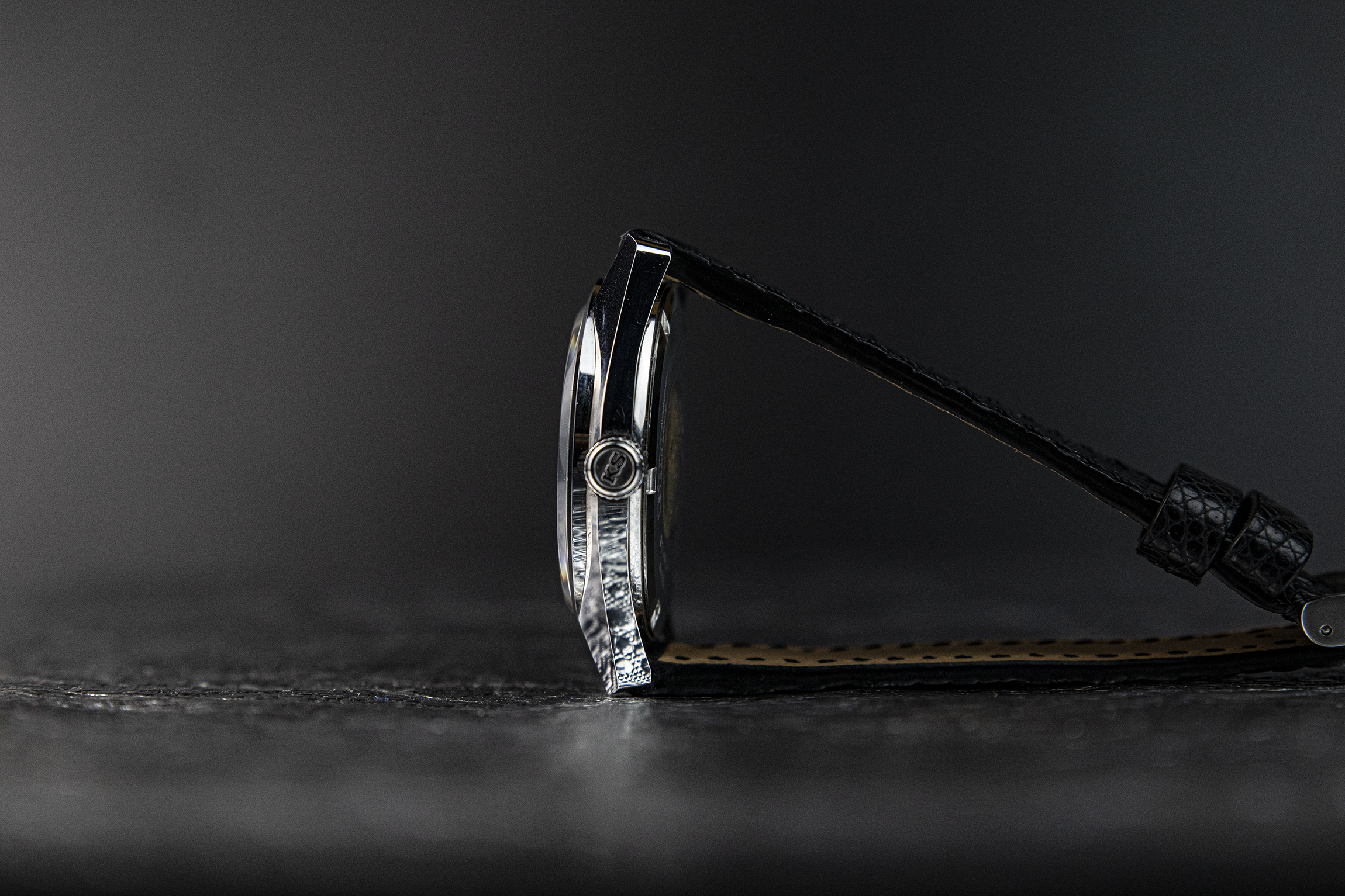 On the back of the King Seiko Hi-Beat 45-7000 there is a gold medallion which was a characteristic of the GS and KS of that demonstrating once more the value of this watch. And when I wear her it is so cool as only I know that gold medallion is there 🙂

The case of this 45 KS follows these Grammar of Design principles. And I love this!!!

I found a nice concise description in a Worn and wound article which I’ll include here about the Grammar of Design:

In early 50’s Seiko did little to distinguish themselves in store displays from their Swiss rivals. Designs were generally simple, with round cases and basic lugs coupled to drab, standard dials.

Up until 1959 Seiko’s cases were not the main focus of the designers as they were focusing dials and movements. In 1956 Seiko brought onboard Taro Tanako, a recent design graduate and the first trained designer to be hired by the brand. Tanaka’s approach was holistic, and from then on the Seiko design studio moved beyond dials to encompass the entire watchmaking process. According to him, the main problem was making Seiko watches—especially the brand’s high-end Grand Seiko and King Seiko lines—stand out on shelves above their competitors. Tanaka wanted to outshine the Swiss, figuratively and literally.

Inspired in part by the art of gem cutting, Tanaka delved into the philosophy of watch design. By 1962, he developed a series of rules for just that; he called it the “Grammar of Design.” The “Grammar of Design” boiled down to four basic tenets. First, all surfaces and angles from the case, dial, hands, and indices had to be flat and geometrically perfect to best reflect light. Second, bezels were to be simple two-dimensional faceted curves. Third, no visual distortion was to be tolerated from any angle, and all cases and dials should be mirror-finished. Finally, all cases must be unique, with no more generic round case designs. Tanaka’s new design agenda led to more stringent manufacturing controls on Seiko’s end, which Tanaka believed was fundamental to match the quality being put out by the Swiss. This pared down philosophy began at the top with Grand Seiko and King Seiko first receiving the benefits, the former unveiling the 4420-9000 in 1967. These early watches still stand as the purest examples of Tanaka’s philosophy, and have rightly earned their collectible status. 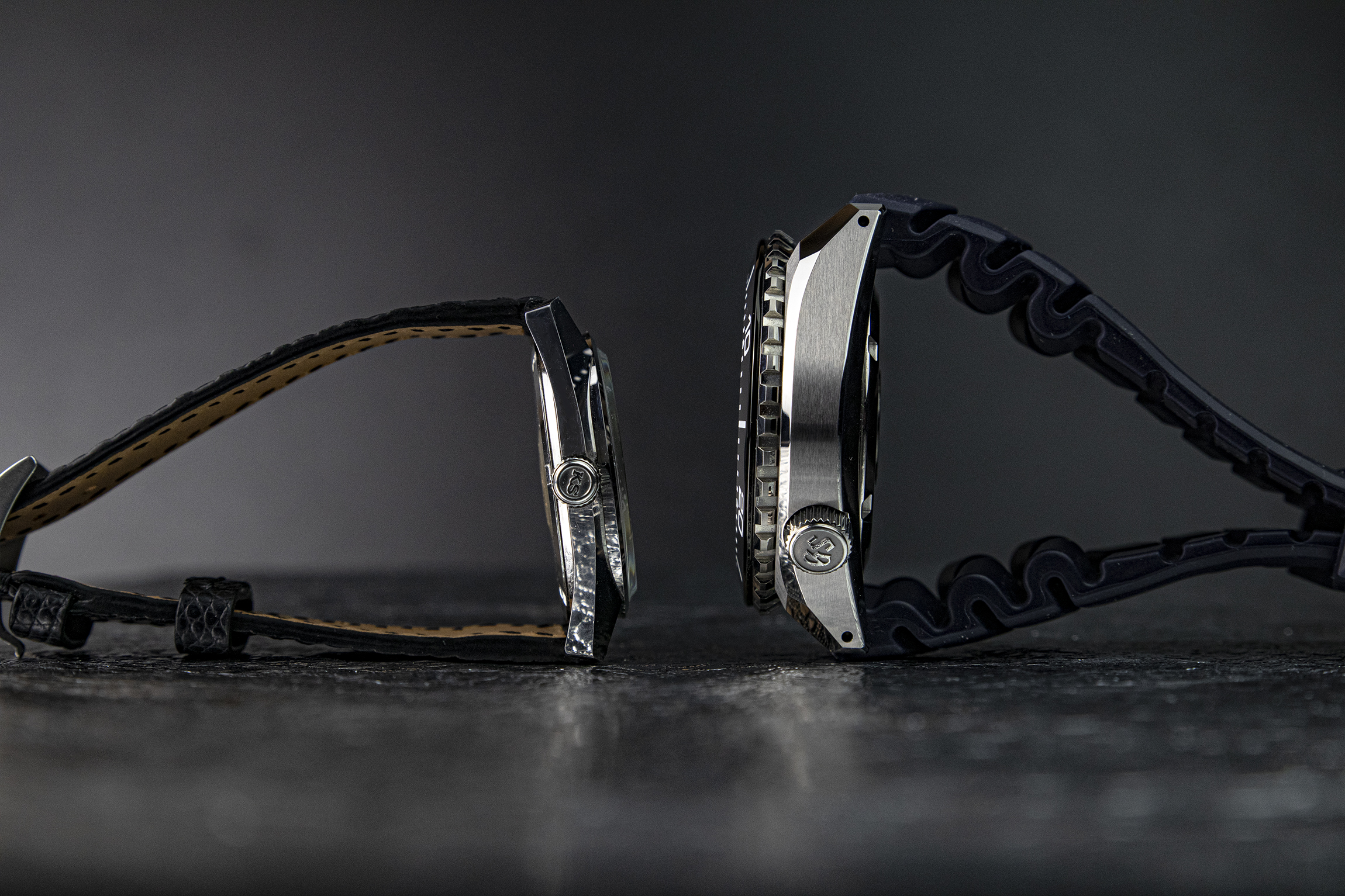 I got this watch from a Japanese seller on an Ebay auction that was ending at 3AM on a 1st of January. I remember vividly that NYE as I was getting ready to put to work my sniper bidding abilities.

Since I got the watch I managed to service the movement which now works amazingly gaining 2 seconds per day. Hibeats are more prone to keep better time and hand-winding is crisp and has a unique mechanical feeling to it.

A while ago I was fortunate enough to benefit of a kind offer from my friend Federico that gave me his slot booked with the Lapinist and my wait was not that long. This watch was a gem as it was, but after the visit to Kamil and his magic work of art… it is a now a gem in every sense of the word (and from any angle). It is hard to describe in words or pictures the look of a 50 years old watch that looks as it did when it left the factory. In fact I believe it looks even better after Kami’s work J I think a video does her better justice than words and pictures and thanks to my friend Andrei (Bravebeaters on youtube) you will get to see her.

Seeing this watch in real life on your wrist throughout the day in various light settings and intensities… it is a unique amazing experience. I have seen quite a few nice watches, but this one in particular, with its simple dial, elegant case lines with amazing polish and well balanced proportions redefines for me the idea of a dress elegant wrist watch.

Take care everyone and enjoy your watches!